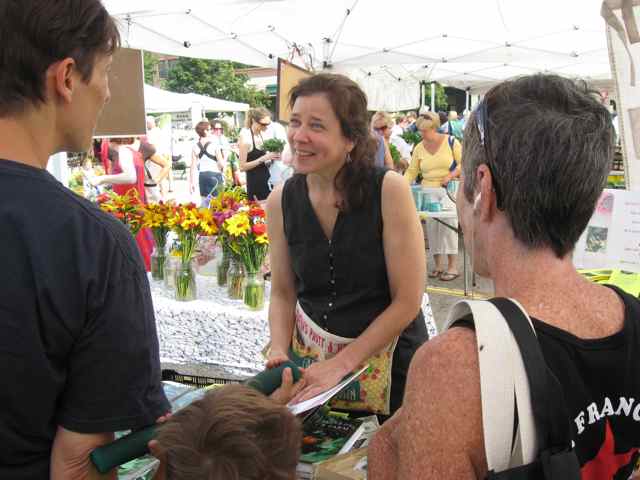 I love this photo of Terra Brockman, author of our The Seasons on Henry’s Farm, because it was taken at the Evanston Farmers Market, where Agate is based and where Henry’s Farm has a popular stand, and at which Terra will occasionally sell books and talk to her admirers. Today is truly Terra Day here at Agate (see below for more on her work), because we just learned her book is one of three finalists for the “Writing and Literature” category of the 2010 James Beard Awards. This couldn’t be more apropos; Terra’s book has many virtues, but the beauty of her writing and the strength of her literary voice may be first among them.

I don’t think any author deserves this recognition more–or worked harder to achieve it–than Terra. Her book was many, many years in the making, growing as it did out of the weekly newsletter she began writing a decade ago to inform Henry’s Farm customers about which new vegetables were coming to market. I met Terra in 2002, when I wrote an article for the Chicago Reader about how she had founded The Land Connection, and around that time I became a devoted regular reader of her newsletter, which by then was distributed via email. When I bought Surrey Books in 2006 and began publishing food-oriented books here at Agate, she was one of the first authors I contacted about writing for us. While she was writing the book, Terra also had to deal with her father’s serious illness (which became part of the narrative, dealing as it does with her and her family’s life over the course of a year on the farm) and the challenges of her ongoing work with the foundation, along with the draconian demands of her publisher. But the end result is a beautiful and enduring work of prose, which captures with power and grace the realities of sustainable farming as practiced by one farmer and his family. If you haven’t already read The Seasons on Henry’s Farm, I hope this will help persuade you to do so.