So I am in New York for BEA, one of my favorite events on the publishing calendar, not least (of late) because it brings me back to NYC. I’m staying at a new hotel that’s having its grand opening tonight (though its “soft opening” was in September–god bless those soft openings) and which is beautiful, and which is in a converted printing press building and thus has adopted in its new incarnation as luxury hotel a printing/publishing theme, and which is only ten short blocks from the usually remote Javits Center. This should become the official BEA hotel, I think–not least because it has a fantastic 16th floor indoor/outdoor lounge, with spectacular views of the skyline. I got to spend about an hour up there tonight in that charmed time just before dusk, a very welcome respite before plunging into the insanity of the next few days. It was the kind of experience you have to remember to stamp and impress into your memory as it happens, because it was fantastic, and if you don’t stop and clock it, however fleetingly, you won’t appreciate the good fortune you’ve had to experience it. And one should appreciate every iota of good fortune that comes one’s way in New York, I believe.

Trucking around New York is always a complicated experience for me, as someone who grew up in the near vicinity and spent a lot of time here as a young person. The weather always seems particularly intense when I’m in New York–usually it’s raining, hard, but if it’s not, it’s because there’s a heavy snowstorm, or an unseasonable, collar-wilting heatwave. I spend a lot of time on foot when I’m in New York, as the roads are about the worst way to get around, and on the sidewalks I’m always coming upon corners or blocks that I’ve never really learned, but which I remember glancingly from the various times I’ve passed through over the last quarter-century or so.

Everything is strange, always, in New York–it really is like no other place on earth–but it’s almost more strange for the streaked compound of the familiar and the unexpected that I always seem to encounter here, at least once every day I spend in the city. Part of this is a result of my fitful visits to the city over the years, where I learn, forget, then re-learn how to get various places and navigate various subway routes (the subways alone are worth a tome of memoir on my experience of New York–they really are the city’s purest expression of itself, especially since they were cleaned up in the 90s and the old mosaics were revealed, and so many beautiful new ones were commissioned; I came upon a moving little Eric Fischl mosaic somewhere in the Penn Station warren, a picture of which I’ve posted below), which lends a heavily multivalent cast to my visits here. 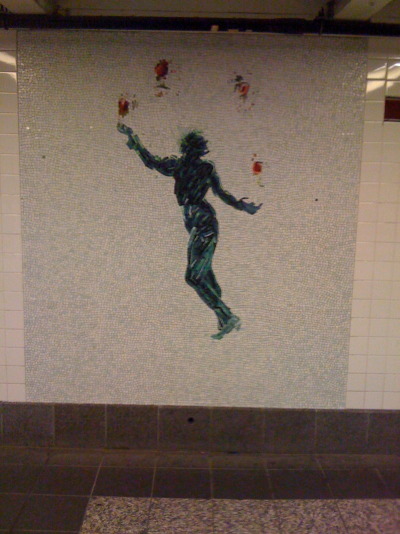 The other part of this, I think, is that for me, New York is the site of my other life, the one I chose not to live–the one where I came home, and found work at the center of the industry to which I’ve devoted my life, rather than make my home a thousand miles away and piece together a career at that industry’s periphery. When I walk the streets of New York, I am haunted a little by that other life–especially, as I was tonight, when I come upon a street corner I can’t remember having seen since one indelibly eventful night in 1985 or so, during the few crucial years of my very young adulthood when I was (it seemed) repeatedly, and violently, having to choose not to live my life in New York.

I am glad I did this, however painful and costly it seemed at the time, because I believe this choice, or those choices, allowed me to love New York in a way I might not have been able to otherwise. Because I did not choose New York–because I did not default to the easy, expected path my life might have taken–I can come back here and see the city for what it is in a way that I might never have achieved had I settled here. If I had, I believe I would have come to hate New York, and probably pretty quickly, in the way so many people that I know here have come to hate it. Instead, I think I better appreciate its massive, distorting singularity, its density of physical event, and especially the unique character of its citizenry, which tonight, on the 1 train northbound, I feel I finally figured out for maybe the first time, in terms of its distinguishing feature of purposefulness.

So many people in New York choose New York–they come here from elsewhere because this is the place to be, and their ambition, their purpose, requires it; so many people from New York stay here because they cannot conceive of any place else that could possibly fulfill their outsize conception of what a city is and should be. And then there are those people here for whom their purpose may be solely to survive New York, which is not an unformidable ambition, either.

So, this is a little bit of what it’s like for me to come back here. You know. It’s a great place to visit, but I wouldn’t want…