Here’s a little diversion from the world of independent publishing. A few years ago, we devised this tasty means of dealing with our Thanksgiving leftovers. In our house–where it’s become almost as anticipated as the Thanksgiving feast itself–we call it leftover pie. I created this very off-the-cuff recipe in response to a request from a friend of mine last week.

Leftover pie is really simple, and all it really requires in terms of culinary skill is some knowledge of how to make biscuits, because biscuits form the crown of the pie. (Let me know if you need my infallibly delicious biscuit recipe.) Of course, you can always use those biscuits-in-a-can if you’re dead set on the convenience option. We don’t judge here–no dish is more egalitarian, if not libertarian, than leftover pie. But here is how the rest of it goes.

Take a large pie plate or a large iron skillet and grease it with Crisco or butter or some such, to prevent sticking. Then take a large quantity of leftover stuffing (ideally the softer variety that’s been cooked inside the bird) and press it around the bottom and sides of your plate/skillet, to form a piecrust-like layer all around. I like to use the bottom of a glass to help press the stuffing into form. It needs some compressing to mold it in there just right. You may also need to soften it with some water or some broth, to ensure compressability. But you don’t want it soggy. If it is soggy, then put the stuffing-lined plate/skillet into your oven for about 15 minutes at around 350, to crisp it up a bit. Then set it aside to await its filling. In a pinch, when we’ve been stuffing-poor, we’ve used mashed potatoes to form the crust, which gives the end product a bit of a shepherd’s pie dimension. But I can’t recommend this as anything other than a fallback.

To create the pie filling, start with a significant quantity–maybe a cup or two cups–of leftover gravy and warm it in a large pan or skillet. Chop or shred a mess of leftover turkey so it’s of forkable size or smaller, per your preference. You can throw skin in there too if so inclined. Dump all this into the gravy as it’s warming. Then toss in whatever leftover vegetables you feel would be palatable (corn, green beans, peas, even brussels sprouts–though not mashed potatoes of either variety, which are too soft). Again, forkable size is key–you don’t want to try to throw a whole half-potato in there, but potato chunks could be OK. You could even throw in leaf vegetables, e.g., spinach, if that’s the kind of thing you ate the day before.

The filling should be not too thin, not too thick. Basically, leftover pie is sort of pot-pie like in this regard. I think the gravy should basically hold together and flavor the other ingredients, and the filling should be pourable. But no more liquid in that. Some gravy enthusiasts may prefer a looser filling. The upshot is add more gravy if you want to, at about this stage of the process. I like to season the filling to taste with salt and black pepper, and even a little cayenne. We make a very spicy stuffing, so that lends the final pie plenty of character. Heat the whole thing up so it’s good and piping before the next step.

Once the filling is ready, dump it over your stuffing crust and fill it to near the top of the plate/skillet, however high that is. Eyeballing is required as you go, of course. Then, over the top of the filling, place your uncooked biscuits so they cover the top of the pie’s surface. It’s a good idea not to make the biscuits too thick, as the key to the baking stage is ensuring that the bottom of the biscuits cook adequately. They will not cook up crispy, that is for sure, but you don’t want them overly gooey, either. We sometimes try to obviate the goo factor by rolling our biscuit dough into small biscuit balls, which then have less flat surface exposed to the filling. The balls should be bigger than marbles but smaller than ping-pong balls. As with the biscuits, cover the surface of the pie filling with these. Then bake the whole shebang for about 20-25 minutes at 450 degrees Fahrenheit, or until the biscuits are as golden as you want them.

The basic idea is you use whatever you’ve got left over along the general lines outlined above. Every leftover pie is different. One thing I appreciate about the leftover pie is that it doesn’t compromise the Thanksgiving feast itself; is there any other meal about which people have stronger, more inflexible ideas about what is or isn’t suitable? The leftover pie exists to be a complement to the holiday meal, not a change or deviation from the main event. I write this fully understanding that some people have very strong feelings (amost as strong as about the feast itself) about sandwiches and sandwich preparation. However, ideally one has enough of everything left over to prepare leftover pie, sandwiches, and whole leftover meals, if one so desires. Below is a photo of last year’s leftover pie. If you decide to try it, I hope you enjoy it as much as we do here. 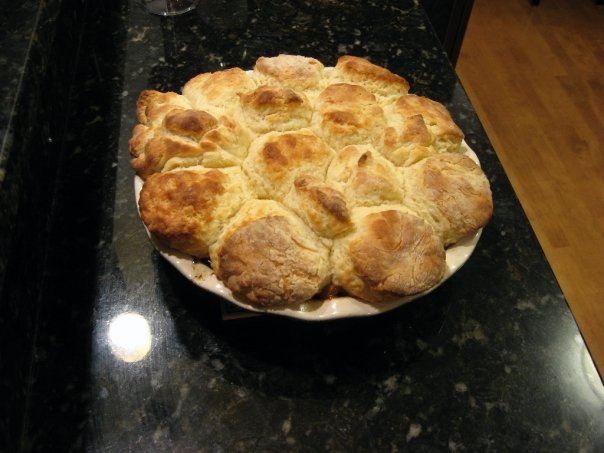