Martha Bayne is the author of Agate Surrey’s new Soup & Bread Cookbook: Building Community One Pot At A Time. In 2009, Martha began the free weekly soup potlucks that became the Soup & Bread series at The Hideout in Chicago. Now in its fourth year, each week Soup & Bread features soups contributed by  various well-known Chicago area chefs (Paul Kahan, the James Beard-bedecked maestro behind Blackbird and Avec, and Stephanie Izard, winner of Bravo’s Top Chef, have stopped by) as well as a range of nonprofessional soup enthusiasts. Guests are encouraged to leave a donation, and all proceeds benefit the Greater Chicago Food Depository and other neighborhood food pantries. The recipes from these weekly dinners formed the basis of the Soup & Bread Cookbook. We asked Martha about soup, the community-building focus of soup exchanges, and what some of her favorite recipes have been. 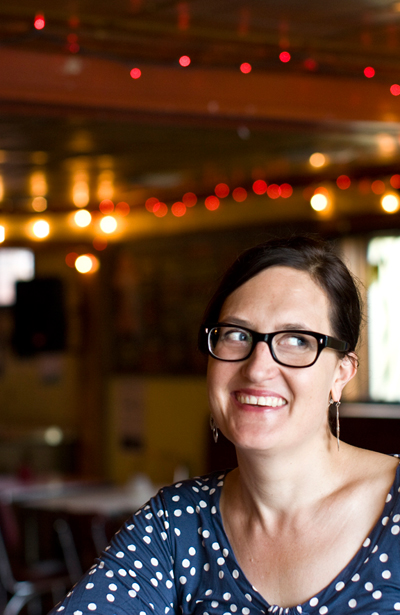 Why soup, as opposed to another type of meal?

Soup just seemed the right fit, both practically and conceptually. For one, it’s generally easy and inexpensive to prepare, so we aren’t asking too much of the contributors in terms of their time and money. Unless, of course, you’re Paul Kahan and you decide to throw truffles in your split pea soup. But that’s your business! Soup is easy to serve—all you need are some soup warmers, ladles, and bowls—which is important in a nontraditional setting like a tavern, where there might not be a full-on kitchen. (Side note: At one point we considered buying some toasters and throwing toast parties, but that never really caught on. I wonder why?) And, of course, soup is a hallmark of help in hard times, from the soup lines of the Depression to the classic soup kitchen model to mom bringing you chicken soup when you’re sick. When we started doing Soup & Bread in 2009 the recession had really just hit in a big way, and people in my world—as everywhere—were losing their jobs left and right. Soup seemed a way to connect the dots between the Hideout’s relatively small community of artists and weirdos and the larger cultural moment.

What do you think makes soup a particularly communal meal?

It’s a very forgiving dish, but from a creative perspective the culinary possibilities are endless, so you’re able to please even very picky eaters. And there’s something just so metaphorically satisfying about a community sharing a meal out of one big pot. When I started working on the book, over and over again people would say, “Oh, well of course you know the stone soup story, right?” The fable about the little village that is starving until everyone contributes a potato or a carrot or an ounce of beans to create a pot of soup? I swear I first heard it in preschool. But, it’s such a great story! It really epitomizes the ability of cooking, and cooking soup in particular, to create community, and of the ability of a community to sustain itself by harnessing the collective power of even its humblest, most raggedy parts.

The Soup & Bread series has become a noisy, communal, well-attended affair that many Chicagoans look forward to every winter. When you began back in 2009, did you ever consider that the event would resonate with so many people?

Not a clue. When this started I thought it would be a fun, casual way to get people out of the house in the depths of winter and raise a little money for a good cause at the same time. I had no idea it would take off the way it did—with hundreds of participants and more than $25,000 raised to date—and it’s been personally very gratifying to see this project grow and evolve. I’ve been particularly heartened by how many people have volunteered not just to make soup (or come eat it) but also to show up early to set up tables and slice bread, to take on boring behind-the-scenes work like helping post recipes to the website, and to jump in to set up events in other cities.

What do you hope the guests at a typical Soup & Bread event would take away from the evening?

I hope they take away the idea that a benefit doesn’t have to be a stuffy, rubber-chicken affair for rich people. That it’s possible to do good and have a good time to boot. That hospitality can be a radical act, and that it’s within their power to take an idea like Soup & Bread or any of the other grassroots community-building ideas in the book and run with them, in whatever direction strikes their fancy.

Can you talk about any particularly inspiring soup-related stories that you’ve learned through the Soup & Bread series?

This isn’t so much a story as an experience, but this summer we did a one-off event as an emergency benefit for the Garfield Park Conservatory, a beautiful 100-plus-year-old structure on the west side of Chicago that was severely damaged in a hailstorm. It’s a wonderful community resource and I’ve spent a lot of time there in the past as a volunteer. After the storm shattered something like 13,000 panes of glass in its greenhouses I threw together a Soup & Bread, for which a dozen restaurants and cooks donated soup and hundreds of people came out to attend. Given that it was organized in just a few days, it was thrilling to raise almost $3,000 in just a few hours, and the staff members who showed up were so happy both for the outpouring of appreciation and for the chance to kick back a bit and have fun after what had been a truly horrible week for them. That was inspiring.

What were the most popular soups you’ve seen over the years? The most unusual?

Squash soups seem to be very popular, year after year, as well as black bean and lentil soups. But it’s been fun to track some culinary trends through soup as well. In 2010, for example, an inordinate number of tortilla soups turned up at Soup & Bread. That was shortly after Rick Bayless won Top Chef Masters, and seemed to coincide with a general surge in interest in regional Mexican cooking. I think Mike Sula’s Asian Carp soup takes the prize as the most unusual thing ever to pass through our Crock-Pots (sweet-and-sour, challengingly bony) but there have been some other extreme efforts as well, like a turkey soup made with stout beer and chocolate chips, or my friend Vera Videnovich’s chicken and nettle soup, made from the weeds running wild on her farm. Then there was the genius night when, in a moment of random soup synchronicity, seven out of eight soups were all the same shade of taupe/tan. We dubbed it “The Night of Beige Soups.” A pot of chili was the lone outlier.

What’s next for Soup & Bread?

The whole point the book is to show that these kinds of projects are just the tip of the iceberg—that soup is really an open-source idea—so I’d love to see other people take it up and launch their own Soup & Bread-style events, and I’d like to see Soup & Bread become a resource for them.