On Tuesday, July 24th, we are hosting a blind taste test with one goal: to determine the best purveyor of Buffalo chicken wings in the City of Evanston. Our cast of judges, including local chefs, media personalities, Buffalo natives, and impassioned wing devotees, will sample Buffalo chicken wings from the four Evanston restaurants that specialize in this delicacy: Wings Over Evanston, Buffalo Joe’s, Wingstop, and Buffalo Wild Wings. The judges will determine Evanston’s best overall wing as well as winners in several important subcategories. 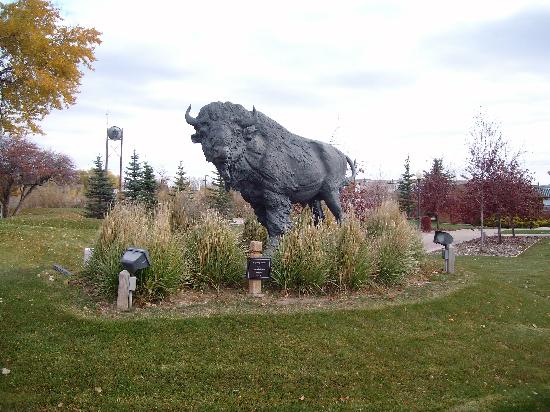 Winners will receive this buffalo statue, currently residing in a local park in Evanston…Wyoming.

For a town of less than 80,000 people, Evanston benefits from a remarkable plenitude of tremendous wing options. This is our chance to recognize and thank these worthwhile establishments, not to mention provide a noble service to the community by offering our definitive judgment on Evanston’s leading wing establishments.

“Judge not, that ye be not judged.” — The biblical equivelant of a yield sign.

Though the Evanston Wing-Off 2012 will not be open to the public (in order to limit potential bias or corruptive elements), Evanstonians and wing enthusiasts are encouraged to participate via Facebook and Twitter (#WingOff2012). We will look to you, dear reader, to share your thoughts on the best way to assess wing quality, your preferred methods for wing cleanup, and your opinions on wing-complementary beers from local area breweries, among other pressing questions that keep us up at night.

“Who wants to lick a messy baby?” — Homer Simpson

We have long had a private concern in forging a consensus on Evanston’s best Buffalo chicken wing—in fact, we first sponsored a much smaller-scale wing-off in 2008.  Informal internal debate and taste-testing has led us to conclude that we owe it to the greater Evanston community to go public with this concern in an official, objective, and statistically sound blind taste test.

The discovery of the Higgs boson, or “God particle,” was actually an incredibly important precursor for conducting our scientific study of wing quality.

In addition to Evanston’s rich history as a fine-dining and cultural epicenter, our fair city just north of Chicago birthed many organizations that sponsor open and intelligent debate, such as the  Women’s Christian Temperance Union and the Illinois Republican Party, established by city father (and personal friend of Abraham Lincoln) John Evans. Evanston is also home to the Rotary International Headquarters, a Masonic Temple, and this one time Tina Fey worked at our local YMCA. We hope to contribute to these esteemed traditions—albeit without the aforementioned organizations’ proclivity for prohibition and politics—by sponsoring a civic event designed to rouse pointed, productive exchanges as well as practical results.

A meeting of the Women’s Christian Temperance Union that, scientists surmise, may have been about Buffalo chicken wings.

Pictured from left to right: Abraham Lincoln, John Evans, and Frances Willard, all of whom may or may not have enjoyed a meal of Buffalo chicken wings together in Evanston, Illinois.