Natasha Korecki, creator of the famed “Blago Blog” and longtime reporter for the Chicago Sun-Times, has just published Only in Chicago: How the Rod Blagojevich Scandal Engulfed Illinois; Embroiled Barack Obama, Rahm Emanuel, and Jesse Jackson Jr.; and Enthralled the Nation with our stand-alone ebook imprint, Agate Digital. An excerpt from the book appeared earlier today on the Sun-Times website, and we invited Natasha to share her thoughts about the book. 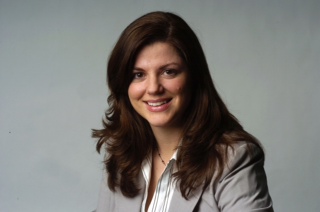 First things first: What was he thinking?

As the feds closed in, Blagojevich was struggling to raise money, and his inability to do so was costing him his political power. He arguably began crossing the line as he grew more frustrated and desperate.

Could this be considered just a case of “Chicago politics as usual” wherein Blagojevich was unlucky enough to be caught? What makes this case different from other Illinois corruption scandals?

Blagojevich came up as part of the “Chicago Machine,” in that his father-in-law, powerful Chicago Alderman Dick Mell, helped launch his political career. But as the ex-governor alienated more and more people—including Mell—it was as if the Machine chewed him up and spat him out. What made it different was that the blatant conduct caught on the recordings took place after two of his closest fundraisers had been criminally charged.

In a story full of shocking, seemingly inexplicable twists, what stood out to you as the most bizarre?

Seeing Rod Blagojevich enter the federal courtroom wearing a jogging suit as an in-custody arrestee is an image I won’t soon forget.

What was it like to have a front-row seat to this story, day in and day out?

It was incredibly dramatic, particularly during the first trial. The testimony was explosive, but then the tapes were even more entertaining. On top of that, the lawyering in the case was sharp and humorous. I relished my front-row seat.

Is Blagojevich as out of touch with reality as he seems? Is it possible to find any sympathy for him?

He continued to have incredible faith in himself even when it appeared obvious that he was headed for defeat. He believed he could win over a jury just like he won over tens of thousands of voters. People are complex and, as in most cases, there’s more than one side to him. It’s a sad situation for his two daughters.

How do you think the other players in this saga fit in, most notably Blagojevich’s wife, Patti?

It was an incredibly tragic tale for some, particularly Christopher Kelly. Others were politically harmed, including Roland Burris, who chose to accept Blagojevich’s appointment to the Senate seat even after the governor was criminally charged. As for Patti, she was caught on numerous embarrassing phone recordings and was accused of being a ghost payroller for Tony Rezko. Ultimately though, the charges involving Patti were not proven in court.

Were you surprised at the national reaction to and interest in “The Blago Blog”? Why do you think people are so fascinated by his story?

I was surprised that it stretched so far beyond Illinois. I think the tapes were the biggest reason people were so captivated by the trials. There was no shortage of incredible conversation caught on tape and there always was the prospect of another major politico being caught on a recording.

Among the other players singed in this scandal, who’s been most negatively affected?

Without question, U.S. Rep. Jesse Jackson Jr. The scandal has dogged him for the last four years and ended up exposing not only a questionable relationship with a fundraiser but also the fact that he was having an affair.  As far as his recent health struggles go, I think that as with most things that have transpired in this case, there’s likely more to the story.