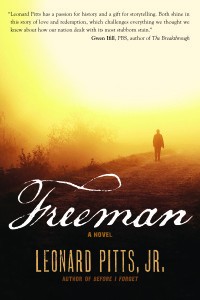 Congratulations are due Leonard Pitts, Jr., whose novel Freeman was just named the winner of the fiction category of the 2013 BCALA Literary Awards, given by the Black Caucus of the American Library Association. Pitts is no stranger to prizes, as his syndicated column won the Pulitzer in 2004, but I know how much winning this sort of recognition for his fiction will mean to him. Arriving as it does during Black History Month, the timing of this award couldn’t be more apropos–Freeman is set in the American South in the immediate aftermath of the Civil War, and delves deep into the lives of both black and white Americans as they deal with emancipation. Few novels published in recent years have more important things to say about African-American history than this one.