We’re very happy to have just published the second cocktail book by Tony Abou-Ganim. Called Vodka Distilled,  it focuses on the spirit that’s both most popular and least respected, at least in the craft cocktail world. Tony’s aim is to rehabilitate vodka by giving us a clearer-sighted take on its strengths in mixology terms, and along the way analyzes the tasting characteristics of almost 60 different vodkas from around the world. In honor of the book’s publication, I asked some Agate staffers about their favorite kinds of vodka and how they like to drink it, and here’s what I learned. Names have been redacted to protect each drinker’s privacy. 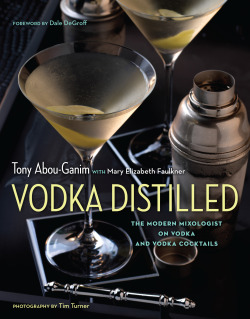 —“I don’t know if I should readily admit this, especially to my co-workers, but I’m a big vodka fan. It’s my go-to spirit of choice. I tend to go with Absolut or Ketel One because when a bartender asks what you prefer, it’s a safe bet that they’ve got one of those. Cocktail of choice: vodka and soda. In my book it’s the little black dress of drinks: goes with everything, is never too heavy or too sweet, good for all occasions.”

—“Chopin is the brand of choice in my household. Typically, we drink a shot after a heavy dinner or to toast during a party. When we toast, we always say Sto Lat, which means “100 years”.  Mixed, I enjoy a Cranberry Vodka occasionally. On a side note, my mom will add a shot of vodka when making her paczki (these are Polish jelly donuts) to add some aroma to the dough, but she will use Absolut or Smirnoff for that.”

—“Grey Goose when we’re getting the ‘nice’ stuff, Smirnoff when it’s supposed to be drinkable for people at parties—sometimes one of their many flavored varieties.”

—“Grey Goose. In a red Solo cup (blue will do in a pinch). Neither measured nor shaken nor stirred—just poured hastily over rocks with a Rockstar and then jostled while I charm the biddies. Chase with a shot of Jäger and then get back on the dance floor.”

—“Stolichnaya. I know, very old school. I like that I can always get it at my grocery store. When my wife and I got married, a friend gave us matching crystal shot glasses. We keep the Stoli in the freezer and every now and then bust out those glasses for an ice-cold shot. Favorite vodka cocktail is the gimlet.”

—“I buy Absolut. My favorite vodka drink is a dirty martini, and I can’t see spending money on top-shelf stuff when I’m going to pour olive juice in it. I’m just looking not to go blind.”

—“I’m a fan of Death’s Door from Wisconsin. It doesn’t have the sharp sting that some other brands have. It’s clean, smooth, and has a subtle aroma and flavor of vanilla. The distillery sources all their organic wheat locally, so it’s a bit more expensive than other brands, but worth the splurge.”

—“Probably due to a common adolescent obsession with the Big Lebowski and an uncommon affinity toward milk, I spent a large portion of my college years drinking White Russians. The recipe is simple: two parts vodka for every one part Kahlua (add in a splash of Bailey’s for extra character). Add whole ice cubes, and fill with skim milk (please, no half and half). I preferred only the most widely available and affordable mid-stream vodkas: Smirnoff and Absolut.”

—“Due to an unfortunate and ill-advised incident many years ago, I no longer drink a lot of vodka.”

—“I prefer Ketel One. This particular vodka tastes, to my palate, like the thermometer in my grade school nurse’s office used to taste, i.e., like rubbing alcohol. Not a selling point for most people, I imagine, but to me pleasingly astringent and suffused with the glow of nostalgia and the delicious feeling of not being in class, whatever the cause.”

—“There are two very large bottles of vodka on our bar: Ketel One and Absolut. Either works for me as long as it is mixed up with my husband’s perfect Bloody Mary recipe and handed to me after 10am on a Sunday morning. Side note: A colleague of mine at Agate, who not only has a very sophisticated palate but also a highly coveted selection of wine and spirits in her home, once shared with me a sip of—are you ready for this?—whipped cream vodka. I loved and hated it all at the same time. I am quite certain you can buy it at Walgreens.”

—“I am the individual referred to so coyly above. While Pinnacle Whipped Cream Vodka is surely no premium brand, it is indispensable in making a Lemon Meringue Pie cocktail (Pinnacle and limoncello). It’s a great accessory and makes a yummy low(er)-cal Black Russian. But when I drink non frou-frou vodka, I drink Absolut.”

—“I do love a Bloody Mary. I plan on trying Death’s Door vodka out of Door County, WI, as my family used to vacation there and to me, nothing screams Bloody Mary like a family vacation.”

—“I’m not a vodka drinker. So I never buy it. But my husband has recently developed an interest in that bottle of Stolichnaya that’s been in our freezer from a party we had a while back. He’s tried adding it to fresh-squeezed juice on ice and making some basic mixed drinks. I think he even tried it in hot chocolate. His review: “tastes great.” My thoughts: it might be time to give him Vodka Distilled.”