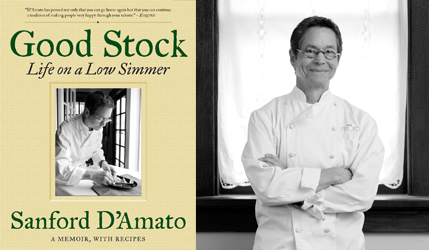 Sanford “Sandy” D’Amato is a legendary American chef whose Milwaukee restaurant, Sanford, has been showered with praise and awards from outlets such as Bon Appetit, Gourmet, Zagat, and the James Beard Awards. His new memoir/cookbook, Good Stock, will be out from Agate Midway in November.

In honor of what would be Julia Child’s 101st birthday, we’re posting this advance excerpt from Sandy’s forthcoming book, detailing the time he and Julia rode the Weinermobile.

It was quite a few years before I saw Julia Child again (in person) after Le Veau d’Or—about 15 to be more precise. It was six months into our first year at Sanford, and I was a cofounder of the original American Institute of Wine and Food (AIWF) chapter in Milwaukee. We had planned a series of events, and the main part of the festivities, scheduled for September 4 to 7 of 1990, was to accompany Julia around the state to showcase the bounty of Wisconsin. Her first visit to the state was to conclude with the chapter’s inaugural dinner at Sanford on her last night.

After several days of stops around the state, we were humming along on the return flight when Julia’s aide, Gabrielle, called me to the jet’s window.

“Sandy—what is that?” she asked.

I peeked out. “Oh my God! It’s the Wienermobile! This is great! They sent the Wienermobile to pick us up!” I was enraptured, until Gabrielle replied, “I don’t think so.”

A flush of fear crossed my mind. Would this be the second time I missed the Wienermobile?

When I was about five years old working (hanging out) at my dad’s grocery, the Wienermobile used to make unannounced stops at local stores to promote their products. As it pulled up in front of our store, I jumped up on the front radiator to look out the window and saw the door rise. Out strode Little Oscar, all four and a half feet, dressed in his signature floppy-hatted chef outfit. He was headed for our front door when I panicked and ran screaming to the back room of the store. The rest of the neighborhood kids got a tour of the Wienermobile along with complimentary official wiener whistles. I always regretted missing my chance.

It seemed like the sun rose, as Julia leaned toward the window and said, “I think I’d like a ride in that wiener bus.” Julia, where have you been all my life? And so transpired as surreal an experience as I’ve ever had: riding down I-94 in the Wienermobile with Julia Child, as the Oscar Mayer theme song blasted through the interior and exterior speakers. We blew along with our de rigueur wiener whistles, as drivers in passing cars honked and waved.

As we pulled up to our destination, the Pfister Hotel, a large, wiener-curious crowd had already gathered, and as the DeLorean-style flip-up door rose, Julia majestically strode out— it was a vision of worlds colliding. The crowds, with their gaping mouths, surely thought this was the largest chef that had ever walked out of the Wienermobile. I think the aura of the Wienermobile even won Gabrielle over.

The most inspirational part of being with Julia for that trip was watching her passively educate everyone around her with the intuitive questions she asked. She had the enthusiasm of a food reporter and recorder, and as soon as she asked a question, I would think, Of course! Why didn’t I ask that? It is the same commonsense brilliance that any great chef has when they produce a dish that is so simple and delicious that everyone chides themselves for not coming up with it. She had an inexhaustible need for knowledge and was always learning—a consummate professional.