This week Agate is publishing Clarence Page’s career-spanning collection Culture Worrier: Reflections on Race, Politics and Social Change, and to mark the occasion we offer this Q&A with Pulitzer Prize-winning columnist. Keep your eyes and ears peeled: Page will be making appearances a variety of television and radio shows, as well as at venues in Chicago and Washington, DC in the weeks ahead. 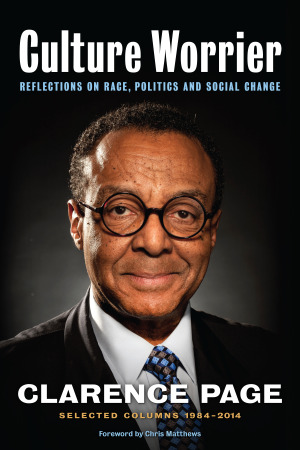 You’ve been writing your column for three decades now. How much has your perspective evolved over the years?

I used to be troubled by negative mail. Then I learned to stop taking it personally. When a person who castigates me like pond scum one week praises me as a national hero after I’ve written something with which they agree, I realize that it is my opinion that they are responding to, not to me. Let ‘em vent. It’s cheaper than therapy.

What do you think gives your column such a broad appeal?

I’m pleased when readers say, “I don’t agree with you much, but I appreciate knowing where you stand.” I think when people turn to the opinion pages sof their newspaper, they expect to read some opinions—strong, clearly defined, and offering enough information and insight to help them form an opinion of their own, whether they agree with mine or not. I try to include a few laughs where appropriate, too.

There’s so much information exploding all around us every day through different media, I’m delighted to hear a reader say they liked a column so much they pinned it to the door of their refrigerator. That’s great. That’s the place for the most important messages in many family’s households—like mine. I call it the Refrigerator Pulitzer. Every columnist wants to connect with their readers with that deep degree of passion.

You’ve garnered a reputation as an unbiased critic unafraid to strike at either side of the aisle. How do you maintain this balance in your writing and TV appearances?

I try to set my moral compass to what’s best for America’s families, not what’s best for a particular political party or interest group. That can be tough sometimes, not when I’m criticized by the relentless grumps but when I am criticized by someone from my own opinion tribe who says, “I thought you were on our side.” I assure them, “I am on your side, even when I offer bitter medicine. It may be hard to swallow but it’s good for you.”

My perspective hasn’t changed much, but the world has. I’ve always portrayed myself as a good Midwestern, middle-of-the-road voice for the sensible center. I am amused when people paint me as a hard-core liberal or hard-core conservative, based on the same column!

But as true right-wingers have gotten a stronger voice in Congress and the media, I am often viewed as a liberal simply because I don’t call myself a conservative. I still defend a lot of conservative ideas when I think they offer a reasonable alternative to what liberals are offering. But I have learned better than to expect many conservatives to give me credit for that.

How has your identity as an African American informed the politics of your column?

It’s interesting to me that I and every other black columnist I know get occasional complaints from conservatives that we write about race “all the time.” I don’t write about race all the time, but the very fact that so many people seem to see race in my columns tell me just how intensely feelings about race, among other tribal considerations, inform everybody’s politics—whether they want to acknowledge it publicly or not. As an African American who grew up in the last days of Jim Crow segregation and the hard-won victories of the civil rights revolution, I write about racial issues more often than most white columnists do. But when I write about climate change, mortgage defaults, student loans, the obesity epidemic, the future of public education, are those racial issues? Maybe not on the surface, but my experience informs my awareness of how differently those issues play out in white communities compared to communities of color.

Similarly, growing up in a black, low-income community but attending integrated schools helps me to understand that you don’t have to be black to be poor in America. In fact, white poor outnumber black and Hispanic poor, even though a lower percentage of whites are in poverty. Yet you’d hardly know that from the coverage that poverty usually receives in daily news reports. As a result, I can’t mention that fact on a radio program, for example, without hearing from some white person who wants to know my source for that, as if they can’t believe it. My source is the Census Bureau. But growing up black in America has made me more sensitive to the value of facts against a flood of rumors and the importance of empathizing with disadvantaged people, regardless of their race, ethnicity, gender, or other background.

Have you found it difficult to try to keep ahead of the curve after over thirty years in journalism?

It is rather unsettling to have your world shaken up as much as the world of media has been rattled in recent years. I thought, for example, that I would never squeeze my bulging imagination into the tight little girdle of Twitter. But, counseled by my millennial-generation son, I love it now. It’s not only fun but an easy way to direct people to my column to get a longer read. Of course, my growing appreciation for Twitter means that my son and his crowd are doing what they did when us boomers took over Facebook. They’re moving onto something newer that I don’t understand—like Instagram.

But what I find reassuring is that the fundamentals of journalism remain in place. Whatever the medium of conveyance might be, people still want reliable news and opinions. They’ve only got so much time to spend with their media, so we in the media still have to compete for their valuable time and loyalty. Even though the competition grows increasingly fierce, I find it’s invigorating. It keeps me young—maybe young enough to figure out Instagram.

Who are the journalists you most enjoy reading today?

I’m surprised and saddened by how many of them are dead. Mike Royko, Molly Ivins, James Baldwin, Louis Grizzard, Art Buchwald and Erma Bombeck are a few of the columnists that excited and amazed me over the years with their fresh points of view, lively wit, and most significantly, their ear for the language, issues, and attitudes of the people and communities that nurtured them. Reading Royko you could almost hear the voices of the Eastern European men in his father’s tavern hashing out the issues of the day over shots and beers. Reading Baldwin’s essays you can hear the voice of a black kid who grew up with more religion than money in the Harlem ghetto of his time, trying to hash out the ethical contradictions of the world around him. Voices as old as Damon Runyon and Frederick Douglass that shaped my own approach to writing still amaze me with how robustly they live long after their creators are gone.

Among the living, I’d say I admire David Brooks for his tireless search for new ideas regardless of the politics involved, Nicholas Kristof for calling attention to stories the rest of media ignore too often (like the kidnapped Nigerian schoolgirls), Kathleen Parker as a witty outside-NYC counterpoint to Maureen Dowd—whom I also love to read—and my Pulitzer-winning pal Leonard Pitts who has breathed new life into the column-writing trade at a time when his voice is very much needed. This is, of course, not a complete list.