Today, the morning after the announcement of the grand jury proceedings over the shooting of Michael Brown in Ferguson, Missouri, it seems apropos to hear from Nick Chiles and Robbin Shipp, Esq., the authors of Justice While Black, published here just last month. 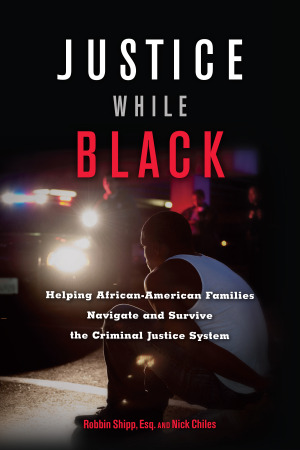 The events in Ferguson are once again shedding a harsh light on how police treat young black men. What does your book offer readers concerned about events like the shooting of Michael Brown?

Our book is entirely preoccupied with the incredibly hostile and sometimes deadly relationship between the African-American community and law enforcement in America. It was that hostile relationship which created the environment in Ferguson that led to the death of 18-year-old Michael Brown at the hands of Officer Darren Wilson. Justice While Black delves into the history of the American police force, showing how it grew out of slave patrols, particularly in the American South. A reading of the history reveals that the police in America were created to control African Americans, not protect and serve them. This perspective puts the events in Ferguson into the proper historical context, showing that throughout the last century there have been regular explosions of black rage in response to outrageous police conduct. But Justice While Black also offers guidance to African Americans about how they might better protect themselves from police.

Why did you decide to write this book?

We began having discussions about the need for this book because Robbin was so disturbed by what she saw in her work as an attorney in Georgia. She felt she needed to do something to stem the never-ending flow of young black males she saw coming through the criminal justice system. After the death of Trayvon Martin, our urgency increased exponentially. We felt that we could write a book that would arm young males and females before they even stepped out into the street. If more of them were aware of the motivations and methods of the police, the ways the system works against them at every step, and how knowledge of their legal rights could protect them in encounters with the police, then more of them might arrive home alive.

How do you think readers should use this book?

They should read over the entire book to gain a thorough overview of how the system works. Then they should return to the chapters on racial profiling and the traffic stop and commit much of that information to memory—because these are often the situations where young African Americans will most likely succumb to the ploys used by law enforcement to get them in handcuffs. If we can instill in all of our young people a working knowledge of their rights, we might be able to start dismantling this country’s prison industrial complex.

What are some common mistakes people make when interacting with the police?

Often, young people in particular relinquish their constitutional rights. For example: A police officer stops a vehicle with a busted taillight for operating with faulty equipment. When the driver is an African-American male, the officer will often ask to search the vehicle—whereas many non-African-Americans simply receive a ticket for the busted taillight. Rather than asserting their right to not allow the search, too many young people consent to the search. If drugs or weapons are found in the vehicle, they then embark on an odyssey into the criminal justice system.

What kind of mistakes do people make when faced with the prosecution?

Our human nature makes us want to attempt to talk our way out of everything, in order to make things better, to make problems go away. This is a huge mistake. Mistakenly believing that they can outsmart the system, young people think that if they tell investigators a good enough story, everything will go away. So they talk. And that talking too often gets them more entangled into whatever they are alleged to have done. They ignore the admonishment that they have the right to remain silent, and all of the other attendant rights associated with the right to remain silent.

Why was it important to include the chapters on the history of policing action against African-Americans and the prison industrial complex?

It is crucially important for readers to understand the historical context of the over-criminalization of the African-American community. Once you become aware of the historical role of the police in American society—which in many regions was to protect wealthy white Americas from the dark and angry hordes they feared were always on the verge of insurrection—it’s not difficult at all to understand how we reached the time and place where the murder of Michael Brown could happen. In this context, the police’s perceived need to quell explosions of racial outrage is clear. And once you understand how the prison industrial complex is a multibillion-dollar profit-making and employment system, you can see why the system seeks to put as many bodies behind bars as possible in order to sustain itself.

Robbin, you’ve been a defense attorney for a long time. Was there anything you learned while writing this book that took you by surprise?

To practice criminal-defense law as an African-American woman and mother for almost twenty years, I learned early on that I had to (for self-preservation) divorce myself from my emotions and merely represent individuals based upon the facts of their cases and the applicable laws. I was surprised to learn about the historical depth of the negative relationship between African-Americans and the police. Coupled with my increased understanding of the modern-day corporate imperatives that effectuate policing abuses around the country, this new knowledge destroyed my carefully constructed emotional distance, and caused me to see anew how African Americans are mistreated by our criminal justice system.

How have things changed over the 20 years you’ve been practicing law?

Things are more stressful. Courts have fewer resources to tap for alternative sentencing solutions. Numerically, more and more conduct by young people is being criminalized, not least because the prison system requires more young people in order to succeed.