In celebration of National Pizza Day, we offer this Q&A with Craig Whitson, a co-author of our forthcoming PASSION FOR PIZZA: A JOURNEY THROUGH THICK AND THIN TO FIND THE PIZZA ELITE, due out from Agate Surrey next month. 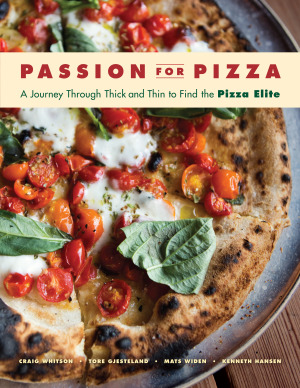 What prompted you to write this book?

My very first cookbook was about pizza. In 1998, my coauthor Tore Gjesteland and I submitted 20 recipes to the unofficial world championship for pizza that takes place at Pizza Expo each year in Las Vegas. We didn´t win, with 19 of the actual pizzas, but ended up winning the Dessert category with our Pecan Pizza Pie. Winning the competition inspired us to write a book called JazzPizza.

Fast forward to 2009. I had gone on to write three books about grilling, one on American food, and one on Italian food. I began to notice as I got older that I continually returned to the simple foods I grew up with. I found myself wanting to revisit the world of pizza. Over the next year or so my wife and I visited important pizza capitols such as New York, Chicago, Naples, and Rome.

In the summer of 2011, I met Tore at the annual pizza and wine bash a mutual friend of ours holds during the Gladmat food festival in Stavanger, Norway. It didn´t take long for our conversation to turn to pizza. Tore explained that he was entertaining the idea of doing a new book about pizza. I told him about my own pizza project and we discussed if this was something we might do together. We agreed that what we each wanted to do was to make a book about the world of pizza. There are lots of great pizza cookbooks and great books about the history of pizza. We wanted to show what goes on behind the scenes in the world of pizza. This quickly led to the idea of traveling to the two most important pizza countries, Italy and USA, to visit the pizza elite, and to tell their stories.

The book could easily have been about the coolest pizzaiaoli and the pizzas worth traveling a long distance to eat, but we also wanted to visit the producers of great tomatoes, flour, cheese and other ingredients. We also wanted to talk to journalists, corporate executives, delivery boys, and pretty much anyone with a connection to the world of pizza.

We realized we were talking about a pretty hefty undertaking. We understood that the people and the topics we would be presenting deserved a beautiful presentation. Both Tore and I had worked with Kenneth Hansen, who had worked on a number of Norway´s most beautiful cookbooks. We met with Kenneth and he told us about the photographer that a project like this would just have to have: Mats Widén. With Kenneth and Mats onboard, we started the three-year-plus journey of this book.

What should readers expect to find in Passion for Pizza?

This is a book that will enhance the best of coffee tables. The photos will inspire readers to pick up their phones and order their favorite pizzas. It will also inspire emptying the piggy banks to cover the cost of a visit to Caiazzo, Italy or Phoenix, Arizona. The stories and interviews are short, allowing readers to pick up the book from time to time and meet the passionate personalities that together give us the great pizza we all know and love. The book would not be complete without recipes. We have included dough and sauce recipes that will give many home cooks a whole new way to approach pizza baking. The pizzas themselves cover the whole range, from a great cheese pizza or Chicago deep-dish pizza to more exotic pizzas topped with squash blossoms or brussels sprouts. The recipes are very easy to use and there is a strong focus on a balance of ingredients. The recipes have “user friendly” written all over them.

As a Norwegian-by-way-of-Oklahoma, you seem like an unlikely pizza scholar. How has your unique background as a chef informed this book?

I’m an Okie at heart, but have lived more than half my life in Norway. I prefer caps to horned helmets and in ideal world I would divide my time equally between my two homes. I grew up with pizza. The foods I remember best from my childhood are Southern specialties like fried chicken, real barbecue, and the like. We ate a lot of Mexican food, some Italian (lots of red sauce and meatballs), and pizza. Pizza wasn´t our food, but pizza fit in perfectly with the other foods we loved. I was lucky to have parents and grandparents who loved good food. Basically we ate two kinds of food: homemade food that my mother or grandmother made, and homemade food made and served at any number of restaurants in Oklahoma City. I won´t lie and say there was no fast food in the picture, but this came much later. Most of the pizza I consumed as a child and teenager was made by dedicated pizza bakers. Pizza has been important throughout my career in food, more as a must-have dish than something I featured on the menu at the restaurants I ran. I am fascinated by pizza, and at its best, pizza is food at its utmost. A great crust with simple toppings in the hands of a master is a stunning piece of work. For me complicated sauces and expensive ingredients just can´t match up. Give me a Pizza Marinara and, as with a perfect brisket, I´m the happiest of campers.

Is there a certain variety of pizza, from anywhere in the world that you feel is underrated?

In Italy I´d say that the most underrated variety of pizza is the all the ones not made in the area where you live. Italians are famously loyal to their local dishes, and why not? Romans often prefer a crispier crust and they can cite any number of reasons why Neapolitan pizza isn´t as good. But it is. There are great pizzas to be found even in the most unlikely of places in Italy. As far as the US goes, Chicago’s deep-dish pizza has been run through the wringer. For many years I was among those who disregarded this pizza, but after having eaten some truly stellar examples, I have become a convert. I can´t eat a lot of deep dish pizza, but I’d love to have a slice of sausage pizza from Lou Malnati´s or Burt´s Place pretty much any time.

What is your next venture?

To promote the book and go back to being a pizza consumer. I hope that as many people as possible will get a chance to experience the world of pizza through this book, and I´ll be happy to join them at the table eating great pizza!