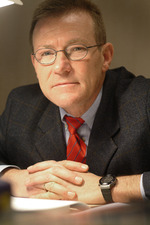 In November, Agate B2 will publish the newest book by Johan Van Overtveldt, author of two other Agate B2 titles: The Chicago School and Bernanke’s Test. This time around, Dr. Van Overtveldt, who is based in Brussels, will be working on home turf: The End of the Euro deals with what he sees as the potential–if not likely–collapse of the euro currency in 2012. The book is available for pre-order now, but in the meantime, here’s a Q&A with Dr. Van Overtveldt that outlines some of the book’s basic concerns:

Europe has attempted to forge monetary unions before, always unsuccessfully. Why did policymakers feel this time would be different?

After the Second World War, preventing another pan-European military conflict was high on everybody’s agenda. A more unified Europe—one that buried, at long, the eternal conflict between Germany and France—was needed in order to achieve this goal. It didn’t take long, however, for everyone involved to realize that the means to more fully unify Europe were very limited. The path of economic integration was seen as the most promising to pursue. From economic integration it was a small step toward monetary integration. For many of the policymakers involved, these were steps toward the ultimate goal of a fully integrated Europe-wide political union. The monetary union, then, was seen as a means to an end. While travelling down that path over the past decades, however, politicians and policymakers too often forgot about the necessary conditions that had to be fulfilled in order for Europe to build an effective monetary union.

How serious are the debt woes facing Spain and Italy?

Italy has a very high public debt (120% of GDP and rising) whereas Spain has a much smaller public debt (75% of GDP, and also rising). But Spain has a much larger private debt (estimated at 180% of GDP) that, moreover, is largely owed to foreigners. Markets will likely respond as the recession deepens in Spain, when a substantial part of that private debt will probably turn into public debt (not least because of Spain’s weak banking sector, especially the regional cajas). These two countries also have very poor growth prospects; aging population is a very pronounced problem in both Spain and Italy.

France is the second largest economy in the eurozone after Germany. France has been running budget deficits since 1974. The debt ratio is approaching 100% of GDP and France also has a weak banking sector, despite its relatively good scores in Europe’s “stress tests” of its banks. If France’s problems were to escalate and the country needed wider European support, the euro would unravel within weeks.

How is Europe’s debt crisis related to the Great Recession?

The Great Recession hit public finances in the eurozone-countries very hard. The cost of the rescue operations necessary to save the banking sector was very high. Then, the recession itself caused a drop in tax revenue and an increase in government expenditures. This double whammy made markets more aware of the precarious state of public finances in large parts of the eurozone. Even without the recession, though, public finances were deteriorating, mainly due to the aging of the population, but the Great Recession accelerated things in a way that caught everybody’s attention.

Why did Germany adopt the euro in the first place?

Two main factors combined. The first was the general guilt Germans felt after two world wars and the atrocities that went with them. The second was the clever maneuvering of former French president François Mitterrand. The French had always been resentful of Germany’s power position in Europe’s economic and monetary affairs. They saw monetary union as a vehicle through which they could “europeanize” German hegemony. After the implosion of the Soviet Union, Mitterrand made former German chancellor Helmut Kohl fearful about whether the international community would accept a reunified Germany. The loss of the deutschmark and acceptance of the euro may have been seen as the price Germany needed to pay for that acceptance. At the time, the Bundesbank lobbied furiously to stop the euro initiative, but in vain.

How high is the risk of Germany withdrawing?

The more Europe’s economic and financial stability become endangered by the crisis, the greater the risk of a German withdrawal. No other people in Europe (apart, maybe, from the Dutch) seem to have as great a national desire for economic stability as the Germans. Even young Germans grow up fully aware of the disasters the financial instability of the 1920s brought upon the country (and the rest of the world). Furthermore, the youngest generation of Germans is clearly less oppressed by the country’s heritage of historical guilt. The imperative to support the European idea, at any cost, is less pressing today than it was ten or twenty years ago.

What needs to happen for the European monetary union to stay afloat?

There are three main aspects to resolving this crisis. First, the structural shortcomings that characterized the euro arrangement from the beginning need to be fixed. This means basically two things: creating a fully empowered political union and redesigning the markets—especially labor markets—in order to improve flexibility and mobility. Second, the crisis in public finances must be addressed. These are intimately linked to the lack of structural growth opportunities; tax increases are no longer a viable option in Europe. Third, the European banking industry is still very weak. It’s imperative to eliminate the least viable institutions, in orderly fashion, and substantially reinforce those that remain.

What would a failure of the European monetary union mean for global markets?

Without a doubt, the end of the euro would mean very negative things for markets worldwide. Uncertainty would shoot through the roof and markets would become extremely risk-averse for an extended period of time. Direct monetary financing of public deficits by central banks would be unavoidable. Inflation would shoot up immediately and the business cycle would nose-dive. It’s not a cheerful prospect.